She and her older sister Millicent are the daughters of Talia and Arturus.

She and Annabelle Deville are BWFF.

Addition info present on subpages at:

Here are clips from a video about her 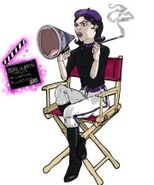 Add a photo to this gallery

Retrieved from "https://witchgirls.fandom.com/wiki/Lucinda_Nightbane?oldid=9478"
Community content is available under CC-BY-SA unless otherwise noted.