Note: Not to be confused with Melody Kroft who sometimes looks similar.

"I'm not the most social of people. My therapist says I have trust issues, or at least he said it until I made him disappear."

Monica Green is a computer enthusiast.

Monica is a shy girl who when not with her friend barley speaks above a whisper if she speaks at all. Bookish and awkward she spends more time on her lap top then she does out in the sun . Monica is the kind of friend who listens and who is full of useful (and sometimes useless) information.

Monica spent most of her life in a single parent home. Her father died when she was four. Recently however that changed when her mother remarried and now Monica finds herself with a new father and brother both she’s not sure will understand her being a witch.

Being smart and bookish has made Monica an excellent student of magic , top of her grade and age over all. Storing her spells on her lap top instead of in a spell book and conjuring creatures out of computer games marks her as one of the rare masters of Cybermancy, a new mystical art combining computers and magic.

In BWFF when Lucinda Nightbane talks about Monica telling her about Magic Friends, Lucy's friend Annabelle Deville says that Monica Green sounds a lot like her cousin Janette Deville. 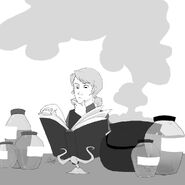 Add a photo to this gallery

Retrieved from "https://witchgirls.fandom.com/wiki/Monica_Green?oldid=9422"
Community content is available under CC-BY-SA unless otherwise noted.